For the film makers behind the 28 projects as well as the attending industry experts, two exhilarating and very successful days full of pitching-sessions and one-to-one meetings at the second edition of European Work in Progress Cologne are almost coming to an end. Yesterday evening, the international jury (Lili Hinstin, Margrit Stärk, Sabina Kodra, Yohann Comte) announced the winners of the awards: 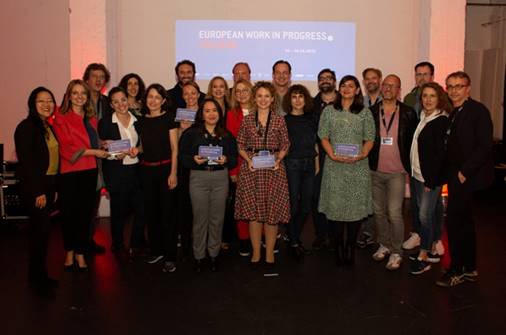 EWIP ARRI Media Award: € 10.000 for colour grading services
MEMORY HOUSE (Brazil, France/Bossa Nova Filmes, Maneki Films) by João Paulo Miranda Maria:
Cristovam, a native from the Brazilian hinterland, works in a former Austrian colony in Brazil. Lonely and ostracized, he discovers an abandoned house, where he takes refuge to the point of losing his sanity and committing murder.

Jury: “This promising first-time director shows a strong visual creativity, rich imagination and sensitivity in approaching the political situation of his country through a main character representing the major issue of minorities today.”

EWIP K13-Studios Award: € 10.000 for soundmixing
GRACE (Poland/ Polished Productions) by Mizutani Eri:
Chigonomai, the chosen ones, are young girls practicing the sacred dance to calm Mount Fuji and explore the core of Japanese tradition. Meanwhile, their teacher Keiko not only strives to find her successor but also seeks to answer the questions about what tradition truly means today and what the role of women in the Kawaguchiko society is.

Jury: “For staging the huge gap between tradition and present of its culture, for its very sincere way of showing authentic and fascinating character through a very cinemathographic point of view, we give the K13 Studios Award to GRACE.”

EWIP Eclair Award: € 2 x 2.000 for the subtitling of a movie in two languages
NIGHT OF FIRE (Mexico, Germany/Pimienta Films, Match Factory Productions) by Tatiana Huezo:
Life in a town at war seen through the eyes of three young girls on the path to adolescence.

Jury: “To support the festival journey of the third feature film of the most talented director nowadays who demonstrated with this new project an outstanding directing style we give the Eclair Award to NIGHT OF FIRE.”

EWIP LAVAlabs Moving Images Award: € 10.000 for visual effects
TAILOR (Greece, Germany, Belgium/ Argonauts Productions, Elemag Pictures, Made in Germany, IOTA Production) by Sonia Liza Kenterman:
Α coming-of-old-age story of a dreamy tailor on the brink of ruin. With a wondrously strange tailor shop on wheels he reinvents his life and changes the brides of Athens.

Jury: “For having found a way of talking about one of the most serious economical crises in Europe with a great sense of humour and poetry that will make it travel worldwide, we give the LAVAlabs Moving Images Award to TAILOR.”

EWIP: ZOOM Medienfabrik Award: € 7.500 for international festival public relations
THE WHALE HUNTER (Russia, Poland, Belgium/ Rock Films, Man’s Films Productions, Orka Studio Produkcyjne) by Philipp Yuryev:
Everything changes for the 15-year-old hunter Leshka when he becomes spellbound by a stunning girl “from the computer”. The protagonist’s crush on such a faraway image, the fair stranger’s blurred silhouette, prompts him to the most audacious act in his life – to set on a dangerous journey across the rough waters of the Bering Strait towards the world unknown in order to find his love.

NAKED ANIMALS (WT) (Germany/CZAR FILM) by Melanie Waelde:
Five young friends try to cope with their everyday lives and to hold on to their self-created little family. But nothing is forever.

Jury: “For two promising first films that equally deserve to be rewarded, the ZOOM Medienfabrik Award will be shared between NAKED ANIMALS and THE WHALE HUNTER.”

Petra Müller, CEO of the Film- und Medienstiftung NRW: “Due to the outstanding quality of the 28 presented projects the second edition of EWIP has continued its great work. This year’s inclusion of documentary films has enhanced the programme. We would like to thank the jury for their commitment. They certainly put much effort into the decision making process. Congratulations to the winners and we wish all the teams and their films as much success as the participants of the first edition.”

Björn Hoffmann, chairman of the board at AG Verleih: "We are delighted about the high quality and the diversity of the presented projects. Additionally, it is exciting to see that EWIP continues to enjoy enormous popularity during its second run. We obviously struck a chord with this event. We wish all projects the best of luck and congratulate the winners from the bottoms of our hearts!”

European Work in Progress Cologne takes place from October 14 to 16, 2019 during the Film Festival Cologne. All projects were presented in pitching sessions to a circle of experienced professionals. In addition to one-to-one meetings, various panel discussions on effective exploitation patterns and new release strategies in cooperation with Creative Europe Desks Germany and a panel in cooperation with MEDIA accompanied this year’s programme.

European Work in Progress Cologne is mainly supported by the Film- und Medienstiftung NRW, one of Europe’s leading film funding institutions, and hosted by AG Verleih, the association of German independent film distributors. The event aims to bring together those creative minds with leading experts and representatives of international distributors, world sales companies, film festivals and other industry delegates in order to further develop and finalise collaboration and financing strategies.