„2016 was the year of anniversaries in NRW. The Filmstiftung turned 25, and there was seldom so many nominations, awards and festial invitations for Filmstiftung-backed productions and filmmakers. ‚Toni Erdmann‘ outshone the whole year of cinema. The Film- und Medienstiftung can be proud of the fact that it came on board the project as the main funder from the very beginning. In general, it’s pleasing to see that several of the year’s artistically convincing and sensational arthouse productions were funded in NRW and made here  – and that many of these films this year came from women directors!", says Petra Müller, CEO of the Film- und Medienstiftung NRW. „There have also been some new things happening in the film and media hub: the launching of the NRW Film Prize and the Film Festival Cologne mean that we now have a central film film festival in Cologne. The innovative funding programmes and scholarships have further strengthened the young film and media scene, and NRW will now see the establishment of a new media network, the Mediennetzwerk.NRW. Following this successful anniversary year, the Film- und Medienstiftung will gain new momentum and continue to be a reliable partner for the industry and a motor for the region’s development in NRW. But, for the time being, we’re saying 'Fingers crossed' for tomorrow’s Oscar nomination. The chances are not that bad." 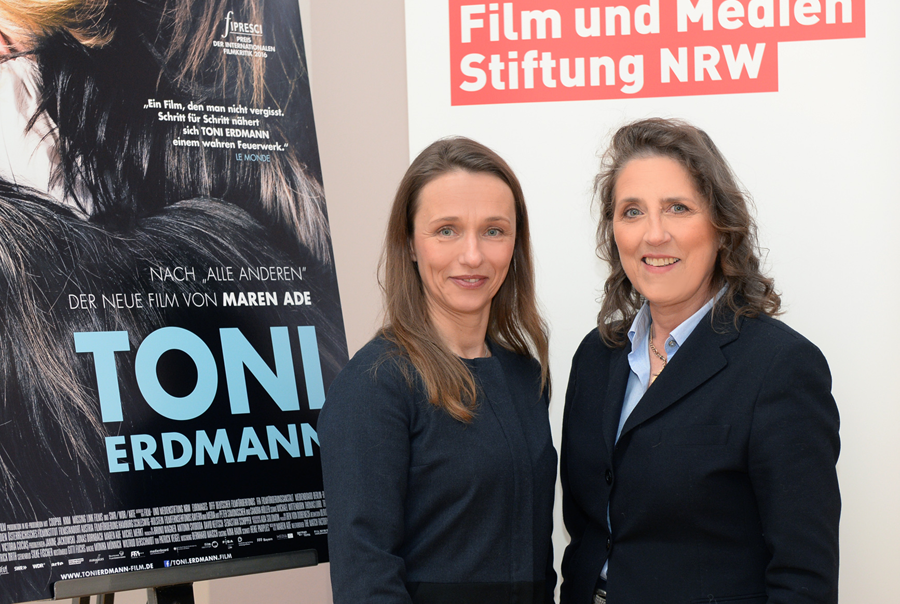 Filmstiftungs-Geschäftsführerin Petra Müller (rechts) und die Leiterin der Förderung, Christina Bentlage © Anna Kaduk / Film- und Medienstiftung NRW
NRW funding in 2016 in numbers
2016 was an exceptional year for the Film- und Medienstiftung NRW – an anniversary year, major national and international success as a funder and a location agency for NRW as a film and media region. The Filmstiftung spent 30.1 m Euros on backing a total of 405 projects for the development, production and distribution of film, TV, games and online content. In addition, the Film- und Medienstiftung supported initiatives and activities throughout the film and media region: 1.22 m Euros for a total of 52 festivals, film presentations and location projects. More than 1.4 m Euros funding came to NRW for nine projects via the Creative Europe programme. Around 14 m Euros were also awarded in the federal state’s CreateMedia.NRW competition. NRW was therefore able to provide around 45.5 m Euros in 2016 for the funding and support of the film and media sectors.  The Film- und Medienstiftung helped to encourage greater networking through extensive publicity, events and conferences for the whole media industry and presented the hub at home and abroad.

Increased NRW effect with concentrated funding profile
110 film and TV projects were supported in the production funding programme with 23.64 m Euros. Around 19 m Euros went to 66 feature films, of which 6.52 m Euros was allocated to 28 international co-productions like „55 Steps" or „#Flora63" and 5.26 m Euros to nine films for children and young people like „Benjamin Blümchen" or „Lilly The Witch 3″. 2.23 m Euros in funding was awarded to 33 documentaries, and the top amount of 5.62 m Euros went to newcomer projects and debuts. 3.68 m Euros flowed into nine extraordinary TV projects like „Brecht – Eine Vorstellung" and another 436,000 Euros into the development of 18 platform-independent series formats. The production funding alone generated around 800 shooting days and expenditure of some 56.85 m Euros, resulting in an increased NRW effect of 256%.

Successful with arthouse and family entertainment
„Toni Erdmann" was the year’s high-flier. The German Oscar candidate also made an impact at the box office with 803,000 admissions. Other commercially successful films were „Help, I Shrunk My Teacher" (1.1 m since release), „Pettersson und Findus: Das schönste Weihnachten überhaupt" (625,000), „Emerald Green" (538,000) and „Vampire Sisters 3 – Journey To Transylvania" (310,000). „The People vs. Fritz Bauer" was also successful in the German arthouse charts with more than 270,000 admissions and was sold in 2016 to 18 territories around the globe. The end of the year saw the artist biopic „Paula" enter the arthouse charts at No. 1 (admissions to date: around 200,000). NRW-backed arthouse films, in particular, were also successful abroad and shown worldwide.

High-rating TV events and sensational series projects
The Filmstiftung was successful in its TV funding programme with the event mini-series „Winnetou" and „Gotthard", the Dominik Graf thriller „Zielfahnder", the Adidas and Puma story „Adidas vs. Puma", which each reached around 5 m TV viewers. Another NRW-backed series „Weinberg" received a Grimme Prize. Moreover, 2017 will see the lavish TV series „Babylon Berlin" coming onto the screens. In addition, the Filmstiftung was a partner of the Drama Series Days at the Berlinale, a partner of Cologne’s Series Summit, was present at Series Mania in Paris, and presented NRW as a TV hub at MIPCOM and MIPTV as well as the International Emmys.

Oscar shortlist, German and European Film Awards, Student Oscars:  shower of accolades for Filmstiftung-backed films
The tragicomedy „Toni Erdmann" by Maren Ade really swept the board during the year. Feted at the film festival in Cannes as the first German film in competition for eight years, there are almost too many awards to count, including three FIPRESCI Awards and five European Film Awards. „The People vs. Fritz Bauer" was the clear winner at the 2016 German Film Awards with six prizes. 2016 began with the nomination fo the Best Foreign Language Feature Film for „Mustang", the Student Oscar for the Best Foreign Animation Film went to the Filmstiftung-backed KHM graduation film „Ayny – My Second Eye" by Ahmad Saleh.

International presence
2016 was an outstanding festival year for NRW-backed films: 164 supported films screened at 117 festivals and received 115 prizes. The Filmstiftung was a partner at the CineMart in Rotterdam and had five films in the festival programme. „Wild" and „Sonita"  had their world premieres at the Sundance Film Festival.  There were 26 funded films at the Berlinale, six NRW films and co-productions had their premieres in Locarno, including „Marija", „Paula" and „Peter Handke – In The Woods, Might Be Late…", and the TV two-parter „Gotthard" was shown as a preview. NRW filmmakers and partners met for industry get-togethers on the occasion of the 2th anniversary at international festivals in Cannes, Venice and Toronto, North America’s most important film market.

A „year of women"
2016 proved to be a particularly successful year for women filmmakers, and the Filmstiftung was involved in many of their films as the main funder. This was the case for Maren Ade’s „Toni Erdmann" as well as for  Nicolette Krebitz‘s „Wild", Deniz Gamze Ergüven’s „Mustang", Corinna Belz‘s „Peter Handke…", Icíar Bollaín’s „El Olivo" and for Asli Özge’s „All Of A Sudden". In recognition of this development, the Filmstiftung and HDF Kino awarded the 20,000 Euros Herbert Strate Prize to Maren Ade and Maria Schrader and sent out an important signal. Margarethe von Trotta, one of the leading German women filmmakers, will be presented with the Helmut Käutner Prize in Düsseldorf this May.

Newcomer funding
The Mediengründerzentrum NRW turned 10 and has already been able to support around 130 media start-ups with advice, coaching and a start-up grant from the federal state. Many of today’s successful young NRW producers come from here. In 2016, the Film- und Medienstiftung supported the next generation from NRW with 5.62 m Euros, backing 39 debuts, newcomer and graduation films. Other graduation films scored major successes apart from the Student Oscar for „Ayny": Martin Hawies' „Toro" was invited to the Berlinale, and Philipp Fussenegger’s „Henry" picked up the First Steps Award. In addition, the Filmstiftung supports young film and media professionals in the development of their projects through bursaries and innovative funding programmes. This is the case for cinema (Gerd Ruge Grant, Wim Wenders Scholarship, Baumi Script Development Award) as well as for new media content (innovative audiovisual content, webvideo grants).

Games, internet and online content
The funding programme for the development of innovative audiovisual content supported a total of 21 projects with 832,000 Euros, including „Daughter", the new project by the makers of „Typoman", Brainseed Factory, from Bonn. The second round of the regional competition  CreateMedia.NRW awarded funding of 14 m Euros to 18 projects from the media and creative industries. The professionalisation of young moving image producers from NRW is supported by the NRW Creators LAB which was initiated by the Filmstiftung NRW.  The four best entries were awarded a web video grant to the value of 24,000 Euros. At the end of 2016, the Filmstiftung subsidiary Mediencluster received the contract to operate the Mediennetzwerk.NRW, which is being provided annually with 1.4 m Euros of NRW state funding. The world’s largest games trade fair gamescom (345,000 visitors, almost 900 exhibitors) and the digital trade fair dmexco (50,700 visitors, over 1,000 exhibitors), where the media region of NRW had a presence with well attended stands, sone again in 2016 with signifcant increases in the numbers of visitors and exhibitors. The VideoDays in Cologne again attracted more than 12,000 YouTubers, and the 6th German Web Video Award was presented in Düsseldorf.

Shooting in NRW
There were a total of 800 shooting days in NRW during 2016. NRW was able to prove the diversity of locations and see full use of the studios and service-producers with such major productions as „Babylon Berlin", „Lommbock" by Christian Zübert with Moritz Bleibtreu, „55 Steps" by Bille August with  Hilary Swank and Helena Bonham Carter, „Monster" by Kerstin Polte with Corinna Harfouch, „Eine sachliche Romanze" by Laura Lackmann with Laura Tonke, „Magical Mystery" by Arne Feldhusen with Charly Hübner, „Wendy" by Dagmar Seume or „#Flora63" with Pierre Richard.

Cinema funding
The Filmstiftung made a total of 818,800 Euros available last year for cinema modernisation, film presentations and the NRW Cinema Programming Prize. 68 NRW cinemas from 42 towns were presented with 430,000 Euros at the Cinema Programming Prize ceremony in November. The new construction and re-opening of the Weltspiegel in Mettmann received 100,000 Euros in support, with the cinema opening its doors again in December. In addition, funding was allocated to the Rex in Cologne (re-opening planned for 2017), the Cineplex Filmpalast, Cologne (performances resumed in December 2016, opening planned for spring 2017) or the Lichtspiele Kalk, Cologne (opening planned for autumn 2017).

Media Summer, Film Autumn, Film Prize and Cinema Programming Prize
The Media Summer kicked off at the NRW Media Forum NRW with dicussions under the banner of „What’s next?" about current developments in television, journalism, entertainment and radio. The conference and events such as the RTL Reception, the anniversary edition of the Film- und Medienstiftung’s industry get-together and the German Web Video Award were all part of a strong media week around ANGA COM. The foundation has been laid for an impressive film festival with the newly positioned Film Festival Cologne and the NRW Film Prize which was initiated by the federal state of NRW, the City of Cologne and the Filmstiftung. Over 20 festivals and professional events, which delighted cineastes and the film industry, followed throughout the region under the „Film Autumn NRW"  label: including the 40th Duisburg Film Week, the Kinofest Lünen, CineCologne, the Filmplus Festival, the Cologne Short Film Festival or blicke – Film Festival of the Ruhr Region. The NRW Cinema Programming Prize vwas presented for the 26th time in Cologne.

Outlook for 2017: Starting into a promising year for film and media
2017 has already started in a promising way: NRW is at the Max Ophüls Prize Film Prize Film Festival in Saarbrücken with 14 films and in various sections of the Berlinale with over 25 films. „A Happy Family" by Nana & Simon is in competition n Sundance, four NRW-backed productions are screening at the International Film Festival Rotterdam. „Kundschafter des Friedens" by Robert Thalheim, „The Beautiful Days of Aranjuez" by Wim Wenders and „Marija" by Michael Koch are currently on general release.

Company and shareholdings
The Film- und Medienstiftung has been operating as an integrated funding institution since 2011 and ia a central port of call for all film and media professionals in NRW.  During this period new funding instruments were developed for innovative and interactive content and new offers for networking and communication have been created in close cooperation with the associated companies.