Düsseldorf/Berlin, 14 February, 2017. The "Baumi" Script Development Award, endowed with 20,000 Euros, was presented for the second time on the fringes of the Berlinale. This year, the grant in memory of the producer Karl "Baumi" Baumgartner goes to the Polish writer and director Kuba Czekaj for his treatment "SORRY POLAND". The jury of the award’s founders Pandora Film, the Baumgartner family and the Film- und Medienstiftung NRW made its decision out of 47 international submissions. This year’s guest juror was the filmmaker Aki Kaurismäki, a close friend and companion, a "partner in crime" of Karl Baumgartner. 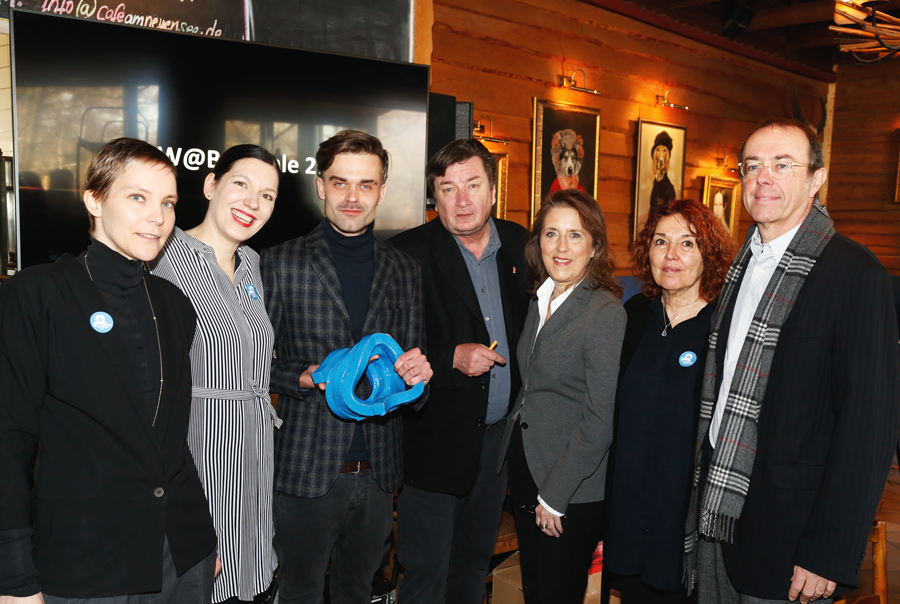 "I like the style, he seems to be a clever guy," says guest juror Aki Kaurismäki. "Poland is a film nation where Baumi began supporting young talents very early on and worked closely with many film artists. Kuba Czekaj and his story idea, which has a nicely subtle and fine political touch, would be exactly to his liking."

About the film
Jan Kowalski, an average Polish fortysomething, is a dancer in a folk song & dance ensemble. Kowalski dreams of becoming the principal dancer, but is still only dancing in the second row. Incapable of assertiveness, he keeps declaring his desire for change. A tour by the ensemble to Taiwan might finally bring about the longed-for changes. He wants to find answers to his questions during this journey into the unknown, to a mysterious and exotic land. But it all turns out quite differently when he realises that escaping doesn’t change anything. At the end, he returns to Poland and finds an inner strength and readiness to take up the fight.

Jury motivation:
"Kuba Czekaj offers an original and refreshing take on Jan Kowalski, an "everyman", who sets off an exotic journey in the hope of finding himself. However, his story doesn’t end here because he learns that escaping isn’t any solution to his problems and questions. Czekaj’s story is rooted entirely in Poland, but it has a universal dimension, including the current escalation of political conditions. Cinematic images are evoked in the mind’s eye in combination with interwoven dream sequences when reading the treatment. We are looking forward to the screenplay which will ask elementary questions in a surprising manner: how does one come to terms with society, the world and, finally, with oneself."

About the award-winner:
Kuba Czekaj was born in Wroclaw/Poland in 1984. He studied Directing at the Silesian University in Katowice and at the Andrzej Wajda Master School for Film Directing in Warsaw. His feature film ¨Baby Bump¨ was made within the framework of the Venice International Film Festival’s Biennale College Cinema programme. His second feature film ¨Królewicz Olch¨ (Erlprince) had its international premiere in the Generation 14plus sidebar at this year’s Berlinale. The film had already won the Young Jury Award for Best Film at the Gdynia Film Festival.

About the Award:
The Baumi Script Development Award was presented for the first time in January 2016 in memory of the film producer and distributor Karl "Baumi"  Baumgartner. Endowed with 20,000 Euros, the award was initiated by the founders Martina and Sandra Baumgartner, the company he co-founded, Pandora Film, and the Film- und Medienstiftung NRW. German and international writers can apply for the Award with a treatment in English. The condition for participatiing is that you should have had at least one screenplay filmed. A jury consisting of the founders and an annually rotating international filmmaker choose one story idea from all of the submissions. The winner of the first Award was the Egyptian filmmaker Omar El Zohairy.

The founders would like to extend special thanks to Friederike Zeit for the design and the making of the prize sculpture, Katja Clos for the graphics including the logo, and to Fritz Erler for the programming of the website.